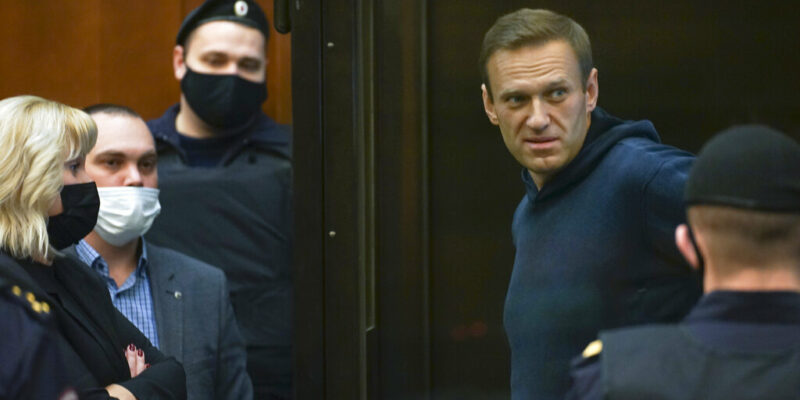 In this handout photo provided by Moscow City Court Russian opposition leader Alexei Navalny talks to his lawyers standing in the cage during a hearing to a motion from the Russian prison service to convert the suspended sentence of Navalny from the 2014 criminal conviction into a real prison term in the Moscow City Court in Moscow, Russia, Tuesday, Feb. 2, 2021. (Moscow City Court via AP)

(AP) — A Moscow court has ordered Russian opposition leader Alexei Navalny to prison for more than 2 1/2 years for violating the terms of his probation while he was recuperating in Germany from nerve-agent poisoning.

The ruling ignited protests in Moscow and St. Petersburg. Navalny, the most prominent critic of President Vladimir Putin, had earlier denounced the proceedings as a vain attempt by the Kremlin to scare millions of Russians into submission. The prison sentence stems from a 2014 embezzlement conviction that he has rejected as fabricated.

The 44-year-old Navalny was arrested Jan. 17 upon returning from his five-month convalescence in Germany from the attack, which he has blamed on the Kremlin. Russian authorities deny any involvement.

The Latest: Fauci: Watch Super Bowl At Home With Household