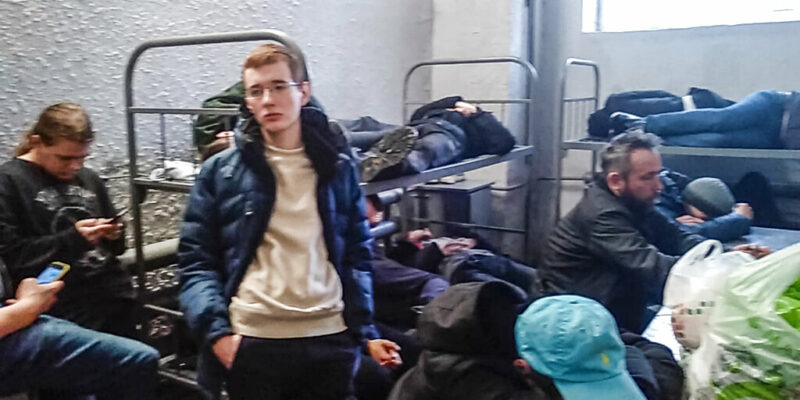 This image taken from a video filmed by Dmitry Shelomentsev shows, a group of detained people inside the deportation centre Sakharovo, 70km (43,7 miles) south-west of Moscow which was urgently transformed into a detention center in the absence of prison space, in Moscow, Russia, Thursday, Feb. 4, 2021. Dmitry Shelomentsev was among those who had to wait in a police bus for hours at Sakharavo before being taken in. Sentenced to 15 days in jail for participating in the Tuesday rally, Shelomentsev messaged the AP reporter on Feb. 4, 2021 morning from a cell for eight inmates where 28 people were held, awaiting transfer to smaller ones. (Dmitry Shelomentsev via AP)

(AP) — Detainees are recounting their miserable experiences as Moscow jails were overwhelmed following mass arrests from protests in support of opposition leader Alexei Navalny this week.

Advocates for prisoners and detainees said Moscow simply could not handle the hundreds of protesters reported to have been convicted for misdemeanor offenses. Detainees described waiting for hours in police vehicles without access to food, water or toilets before they were taken to overcrowded jail cells, where there was little regard for coronavirus precautions.

Kremlin spokesman Dmitry Peskov said there were more detainees than Moscow detention centers could swiftly process, but he blamed the problem on the protesters themselves.

Georgia Congresswoman Reacts To House Action Against Her