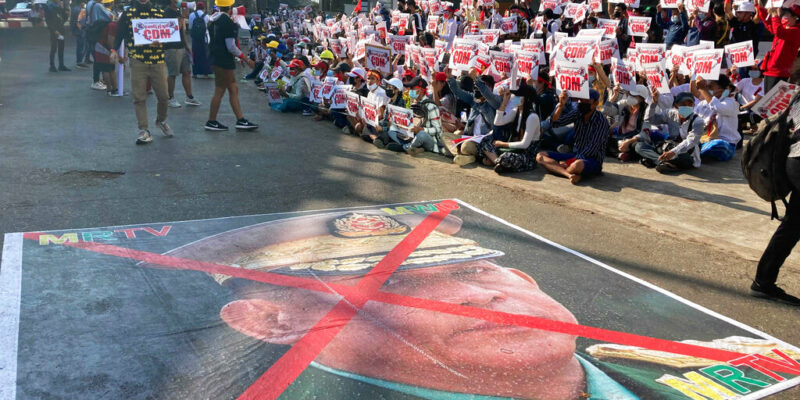 A large image that has an X mark on the face of Commander in chief Senior Gen. Min Aung Hlaing, also chairman of the State Administrative Council, lies on a road as anti-coup protesters gather outside the Hledan Centre in Yangon, Myanmar, Sunday, Feb. 14, 2021. Daily mass street demonstrations in Myanmar are on their second week, with neither protesters nor the military government they seek to unseat showing any signs of backing down from confrontations. (AP Photo)

(AP) — Sightings of armored personnel carriers in Myanmar’s biggest city and an internet shutdown have raised political tensions, after vast numbers of people around the country flouted orders against demonstrations to protest the military’s seizure of power.

Ambassadors from the U.S. and Canada and 12 European nations called on Myanmar’s security forces to refrain from violence against those “protesting the overthrow of their legitimate government.” They also condemned the military’s interference with communications.

Monday holds the prospect of two flashpoints for the political standoff, a court appearance by ousted national leader Aung San Suu Kyi and a possible announcement of the death of a young protester shot last week.