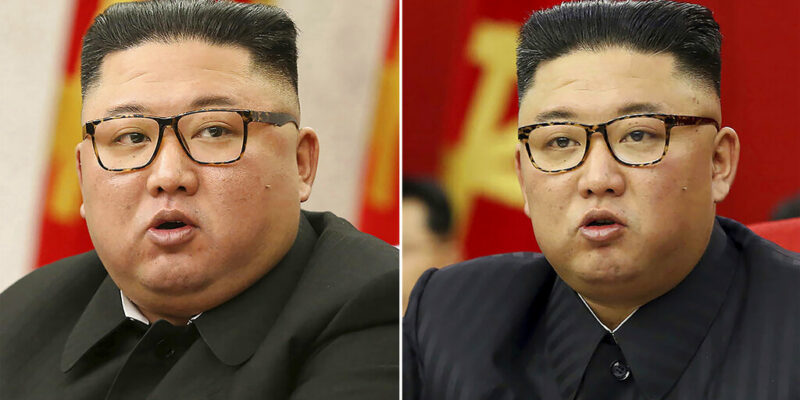 This combination of file photos provided by the North Korean government, shows North Korean leader Kim Jong Un at Workers' Party meetings in Pyongyang, North Korea, on Feb. 8, 2021, left, and June 15, 2021. Last time when Kim faced rumors about his health, the North Korean leader had walked with a cane, missed an important state anniversary or panted for breath. Now, the 37-year-old faces fresh speculation about his health because he looks thinner noticeably in recent state media images. Independent journalists were not given access to cover the event depicted in this image distributed by the North Korean government. The content of this image is as provided and cannot be independently verified. (Korean Central News Agency/Korea News Service via AP, File)

(AP) — The last time Kim Jong Un faced rumors about his health, it was because the North Korean leader walked with a cane, missed an important state anniversary or panted for breath.

Now, the 37-year-old faces fresh speculation about his health because he looks noticeably thinner in state media images. Kim’s health is a matter of intense global interest because he hasn’t publicly anointed a successor to control his country’s advancing nuclear program targeting the United States, if he is incapacitated.

Some observers say Kim, who has weighted 308 pounds, likely has gone on a diet to improve health and may have lost about 22-44 pounds. Others say his chronic health problems might have worsened. Experts said his weight could increase the possibility of cardiovascular diseases.