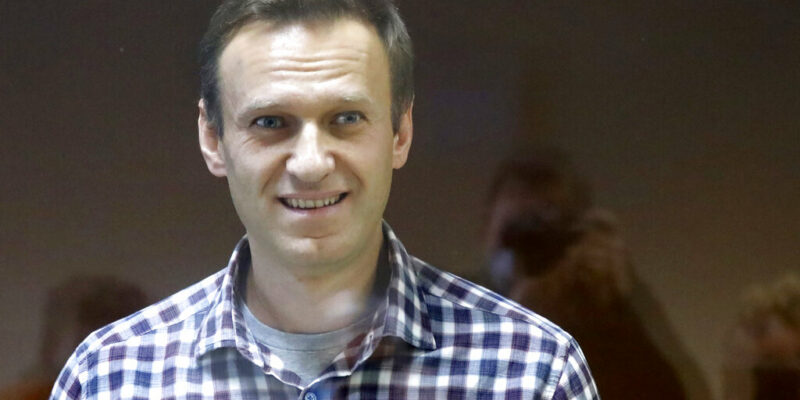 FILE - In this Saturday, Feb. 20, 2021 file photo, Russian opposition leader Alexei Navalny stands in a cage in the Babuskinsky District Court in Moscow, Russia. Russian opposition leader Alexei Navalny described tight controls at his prison in a letter posted Monday March 15, 2021, saying they include hourly checks during the night. Navalny's note posted on his Instagram page confirmed for the first time that he arrived at a prison colony in Pokrov in the Vladimir region, 85 kilometers (53 miles) east of Moscow, which stands out among Russian penitentiary facilities for its particularly strict regime. (AP Photo/Alexander Zemlianichenko, File)

(AP) — Supporters of jailed Russian opposition leader Alexei Navalny are calling for a new massive protest across the country to demand his release.

In a statement posted Tuesday on Navalny’s website, they urged Russians to sign up for a protest on an interactive map and said they will set a date for it when the number of people willing to take part reaches at least 500,000 nationwide. The organizers promised in a statement that the rally would the biggest that Russia has seen.

The 44-year-old Navalny, who is Russian President Vladimir Putin’s most outspoken foe, was arrested on Jan. 17 upon his return from Germany, where he spent five months recovering from a nerve-agent poisoning that he blames on the Kremlin.