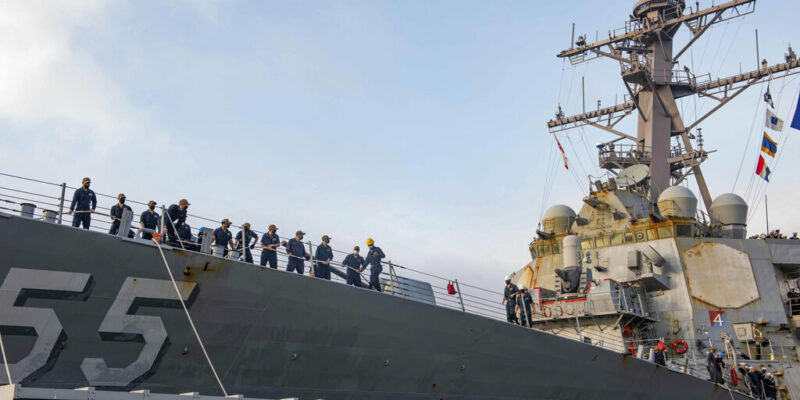 In this photo provided by the U.S. Navy, sailors aboard the guided missile destroyer USS Stout handle mooring lines during the ship's return to home port at Naval Station Norfolk, in Norfolk, Va., in this Oct. 12, 2020, photo. The USS Stout showed rust as it returned from the 210-day deployment. The rust was quickly removed and the ship repainted. But the rusty ship and its weary crew underscored the costly toll of deferred maintenance on ships and long deployments on sailors. (Spc. Jason Pastrick/U.S. Navy via AP)

(AP) — The Navy’s speedy littoral combat ships had propulsion problems. Its stealthy destroyer isn’t ready to deploy. Its newest aircraft carrier is having problems with the system that launches aircraft. The Navy is trying to get back on an even keel after shipbuilding and maintenance problems as the Biden administration prepares to release its budget. The troubles amount to lost time and billions of dollars in the face of tensions in the South China Sea, an emboldened Russian navy and Iranian speedboats harassing vessels in the Persian Gulf. The Navy’s top officer, Adm. Mike Gilday, said there has been a course correction and the Navy is back on a “positive trajectory.”

Could Beto Be Back? O’Rourke Mulling Bid For Texas Governor

Blinken Off To Mideast To Push Peace Talks After Gaza Truce