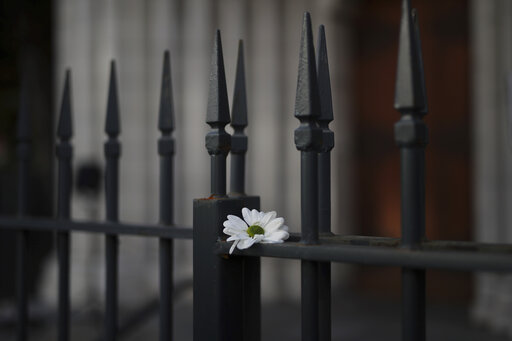 A flowers, is set up for the victims, on the door of Notre Dame church, in Nice, France, Friday, Oct. 30, 2020. A new suspect is in custody in the investigation into a gruesome attack by a Tunisian man who killed three people in a French church. France heightened its security alert amid religious and geopolitical tensions around cartoons mocking the Muslim prophet. (AP Photo/Daniel Cole)

(AP) – Mourners are lighting candles and praying in front of a French church where three people were killed by a young Tunisian who recently migrated to Europe.

Tunisian anti-terrorism authorities opened an investigation Friday into an online claim of responsibility by a person who said Thursday’s knife attack at the Notre Dame Basilica in the Riviera city of Nice was staged by a heretofore-unknown Tunisian extremist group.

Meanwhile, France heightened security nationwide amid religious and geopolitical tensions over published cartoons mocking the prophet of Islam that have angered Muslims around the world. The attacker was seriously wounded by police. French authorities called the attack “Islamist terrorism,” and prosecutors in France and Tunisia are investigating.

Over 3 Million Cases Of Coronavirus Reported In Mideast