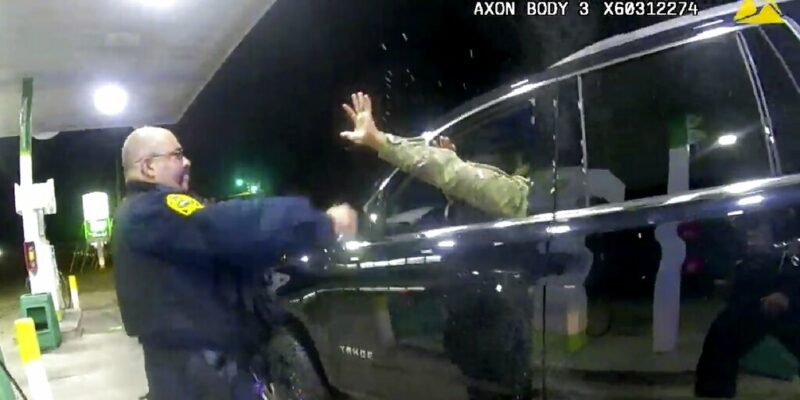 In this image made from Windsor, (Va.) Police video, A police officer uses a spray agent on Caron Nazario on Dec. 20, 2020, in Windsor, Va. Nazario, a second lieutenant in the U.S. Army, is suing two Virginia police officers over a traffic stop during which he says the officers drew their guns and pointed them at him as he was dressed in uniform. Caron Nazario says his constitutional rights were violated by the traffic stop in the town of Windsor in December. (Windsor Police via AP)

(AP) — A Virginia town has announced that one of two police officers accused of pepper-spraying and pointing their guns at a Black Army officer during a traffic stop has since been fired.

The announcement from the town of Windsor on Sunday night came hours after the governor called for an independent investigation into the December 2020 encounter. U.S. Army second lieutenant Caron Nazario, who is Black and Latino, filed a lawsuit this month against two Windsor officers, accusing them of drawing their guns, pointing them at him, pepper-spraying him and knocking him down among other actions.