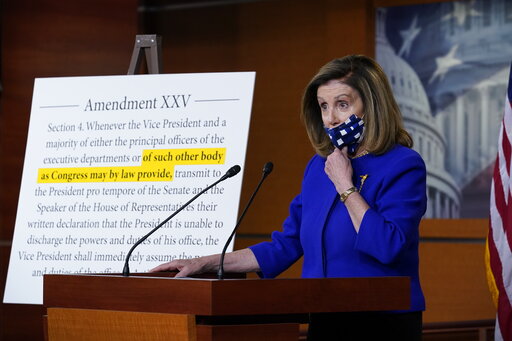 Speaker of the House Nancy Pelosi, D-Calif., speaks during a news conference at the Capitol in Washington, Friday, Oct. 9, 2020. (AP Photo/J. Scott Applewhite)

(AP) – House Speaker Nancy Pelosi unveiled legislation Friday that would allow Congress to intervene under the 25th Amendment to the Constitution to remove the president.

Pelosi insists it’s not about President Donald Trump but inspired by the need for greater congressional oversight of his White House. The bill would set up a commission to assess the president’s ability to lead the country and ensure a continuity of government.

Coming just weeks before the Nov. 3 election, with no hopes of the bill becoming law, the rollout was quickly dismissed by Trump allies as a stunt. White House press secretary Kayleigh McEnany on Fox called it “an absurd proposal.”