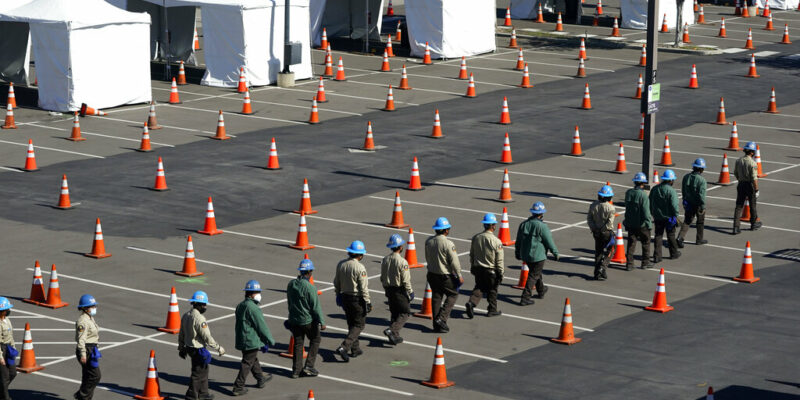 Members of the California Conservation Corps line up to help with the setup of a new federal COVID-19 vaccination center on the campus of the California State University Los Angeles Friday, Feb. 12, 2021, in Los Angeles. The federal government is partnering with the state of California to launch the vaccination center, as part of the Biden administration's effort to scale up COVID-19 vaccine distribution nationally. (AP Photo/Marcio Jose Sanchez)

(AP) — The Pentagon has approved the deployment of 20 more military vaccination teams that will be prepared to go out to communities around the country. This puts the department on pace to deploy as many as 19,000 troops if the 100 planned teams are realized.

The troop number is almost double what federal authorities initially thought would be needed. Chief Pentagon spokesman John Kirby says the latest approval brings the number of teams so far authorized to 25, with a total of roughly 4,700 service members. He says the teams are being approved in a phased approach, based on the needs of the Federal Emergency Management Agency.

Fauci: Masks To Be Worn For Several Months