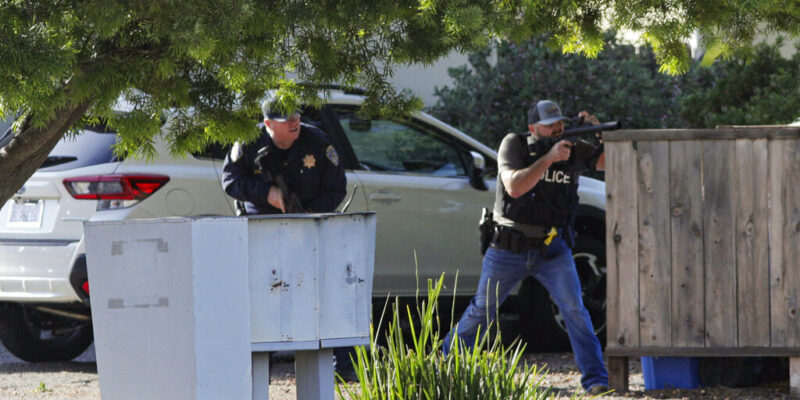 Officers take aim at an apartment across Camilla Court, Monday, May 10, 2021, in San Luis Obispo, Calif. Police said two police officers have been shot while serving a search warrant and the suspect has died. (David Middlecamp/The Tribune (of San Luis Obispo) via AP)

(AP) — A California police officer who was shot and killed while serving a search warrant has been identified as a 12-year law enforcement veteran and a current detective in San Luis Obispo.

Detective Luca Benedetti was killed Monday when shots were fired shortly before 5:30 p.m. as officers served a search warrant at an apartment in the Central Coast city.

Detective Steve Orozco was wounded in the shootout and expected to recover from his injuries. Police say the gunman inside the apartment, Edward Zamora Giron, shot and killed himself.

City Manager Derek Johnson calls the shooting “a tragedy beyond measure for all of those who serve and care about our community.”