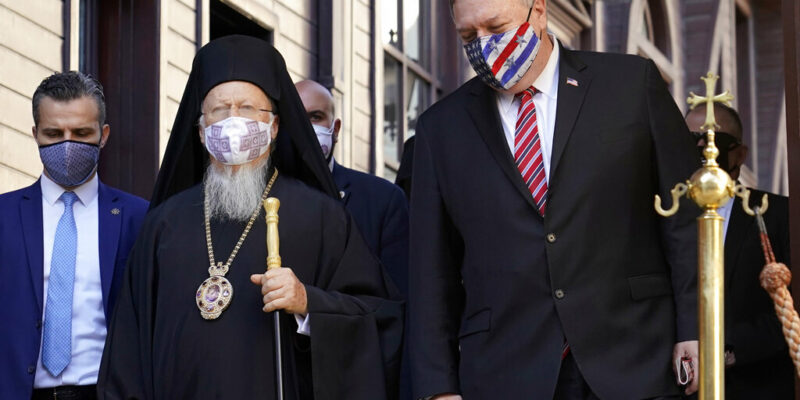 Secretary of State Mike Pompeo, right, speaks with Ecumenical Patriarch Bartholomew I, the spiritual leader of the world's Orthodox Christians, before departing the Patriarchal Church of St. George in Istanbul, Tuesday, Nov. 17, 2020. Pompeo's stop in Turkey is focused on promoting religious freedom and fighting religious persecution, which is a key priority for the U.S. administration, officials said. (AP Photo/Patrick Semansky, Pool)

(AP) — U.S. State Secretary Mike Pompeo has with the Istanbul-based spiritual leader of the world’s Orthodox Christians during a short trip to Turkey that has raised the ire of Turkish officials and includes no meetings with any of them. Tuesday’s talks with Ecumenical Patriarch Bartholomew I were to center on religious freedoms in Turkey, which has angered Ankara and prompted officials to call on Washington to focus on human rights violations in the United States. The trip comes amid already frayed ties between the two NATO allies over a series of issues, even though Turkey’s President Recep Tayyip Erdogan and U.S. President Donald Trump have maintained friendly personal ties.