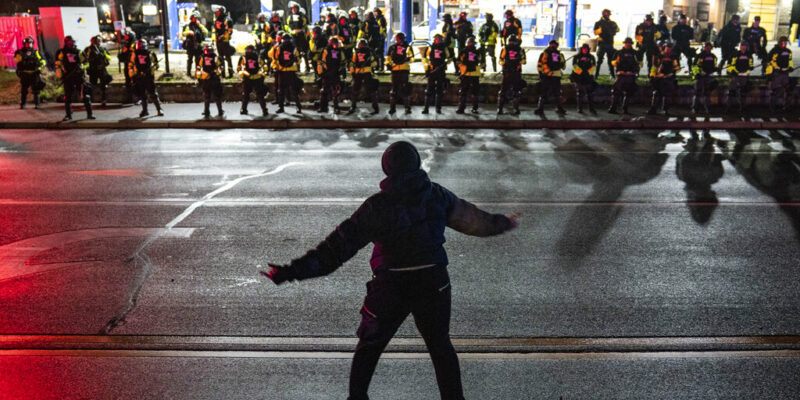 A demonstrator heckles authorities who advanced into a gas station after issuing orders for crowds to disperse during a protest against the police shooting of Daunte Wright, late Monday, April 12, 2021, in Brooklyn Center, Minn. (AP Photo/John Minchillo)

(AP) — Police clashed with protesters for a second night in the Minneapolis suburb where a police officer fatally shot a Black man in a traffic stop over the weekend. Brooklyn Center’s police chief said the officer had apparently intended to fire a Taser, not a handgun, as 20-year-old Daunte Wright struggled with fellow officers. Police Chief Tim Gannon described the shooting as “an accidental discharge.” Wright died Sunday in Brooklyn Center, a city of about 30,000 people just north of Minneapolis. His death sparked protests and unrest. Police reported 40 arrests Monday night at the Brooklyn Center protest. The Minneapolis area was already on edge because of the trial of the police officer charged with the murder of George Floyd.

Poll: 15% Of Americans Worse Off A Year Into Pandemic