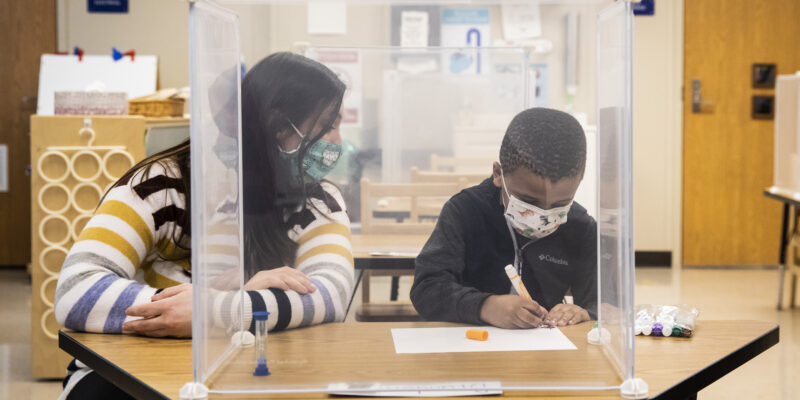 FILE - In this Jan. 11, 2021 file photo, pre-kindergarten teacher Sarah McCarthy works with a student at Dawes Elementary in Chicago. President Joe Biden says he wants most schools serving kindergarten through eighth grade to reopen by late April 2021. But even if that happens, many schools in urban areas that serve high concentrations of minority students are likely to stay closed. (Ashlee Rezin Garcia/Chicago Sun-Times via AP, Pool, File)

President Joe Biden says he wants most schools serving kindergarten through eighth grade to reopen by late April. But even if that happens, it is likely to leave out millions of students, many of them minorities in urban areas. Shavar Jeffries is president of Democrats for Education Reform. He says that inequity could bring “a generational level of harm” for low-income and minority students. Jeffries says teachers unions in cities are standing in the way of holding in-person classes. Unions say their members and students should be back in schools only when it’s safe — and that could be harder to achieve in cities.

‘I Have To Go’: Fans Who’ve Been To Every Super Bowl Book In