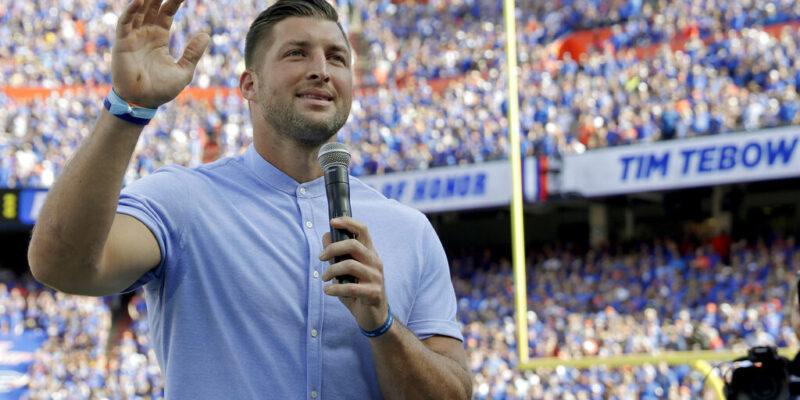 FILE - Former Florida football player Tim Tebow speaks to fans after he was inducted in the Ring of Honor at Florida Field during the first half of an NCAA college football game against LSU in Gainesville, Fla., in this Saturday, Oct. 6, 2018, file photo. Tebow and Urban Meyer are apparently getting back together, this time in the NFL. The former Florida star and 2007 Heisman Trophy-winning quarterback is expected to team up with his college coach by signing a one-year contract to play for the Jacksonville Jaguars, the NFL Network reported Monday, May 10, 2021. (AP Photo/John Raoux, File)

(AP) — Tim Tebow and Urban Meyer are together again. But this time in the NFL and with Tebow playing a new position. The former Florida star and 2007 Heisman Trophy-winning quarterback has signed a one-year contract with the Jacksonville Jaguars and will attempt to revive his pro career as a tight end. The move also reunites two of college football’s most polarizing figures over the past 15 years. The 33-year-old Tebow is returning to the NFL after five years in the New York Mets’ organization and he’ll be playing for Meyer for the first time since his senior year in 2009.

China, In Global Campaign, Vaccinates Its People In Thailand