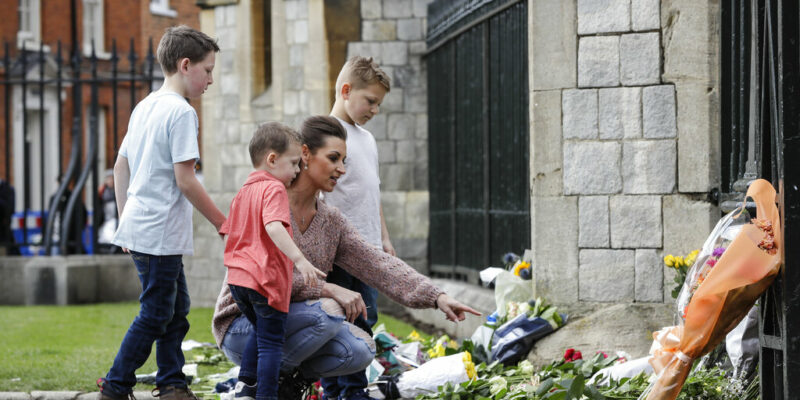 A family look at flowers outside the Cambridge gate of Windsor Castle in Windsor, England after the announcement regarding the death of Britain's Prince Philip, Friday, April 9, 2021. Buckingham Palace officials say Prince Philip, the husband of Queen Elizabeth II, has died. He was 99. Philip spent a month in hospital earlier this year before being released on March 16 to return to Windsor Castle. (AP Photo/Kirsty Wigglesworth)

The British Royal Family is mourning the loss of Prince Philip. The Duke and Duchess of Cambridge retweeted a message from the Royal Family that said the Duke of Edinburgh passed away peacefully this morning at Windsor Castle. The husband of Queen Elizabeth was 99-years-old.

A second tweet said the Royal Family joins people around the world in mourning his loss, and further announcements will be made in due course. The Duke and Duchess of Sussex have also offered their condolences, and tweeted this morning, “Rest in peace, your Royal Highness The Duke of Edinburgh.”