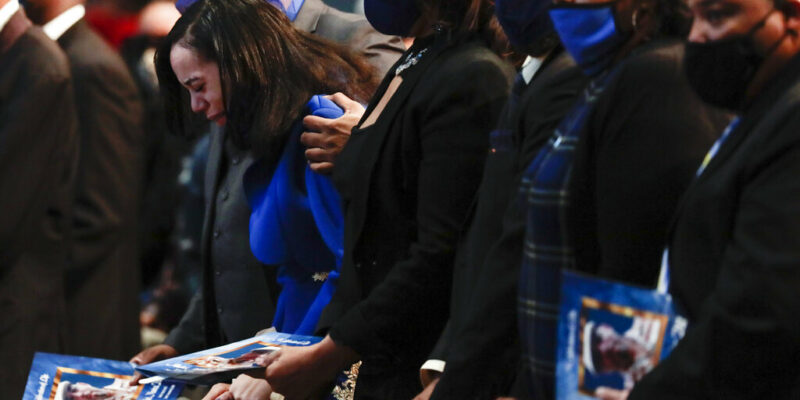 Karissa Hill, daughter of Andre Hill, is comforted by family as she weeps while her father's casket is closed at the start of the funeral services for Hill on Tuesday, Jan. 5, 2021 at First Church of God in Columbus, Ohio. Hill, a 47-year-old Black man, was shot and killed by Columbus Division of Police Officer Adam Coy in the early morning of Dec. 22, 2020 after officers responded to a non-emergency call in the area. (Joshua A. Bickel/The Columbus Dispatch via AP)

(AP) — As light snow fell around the church, Andre Hill’s family, friends and strangers angry about his death walked into a Columbus church to honor his life.

Inside the church on Tuesday morning, a photo of Hill, 47, surrounded by the faces of Tamir Rice, Breonna Taylor and the other Black people killed by authorities in recent years leaned against the stage next to his open casket.

The Rev. Al Sharpton delivered Hill’s eulogy. Columbus has been shaken by the December killings of 23-year-old Casey Goodson Jr. by a Franklin County Sheriff’s Office deputy and Hill by a Columbus police officer.