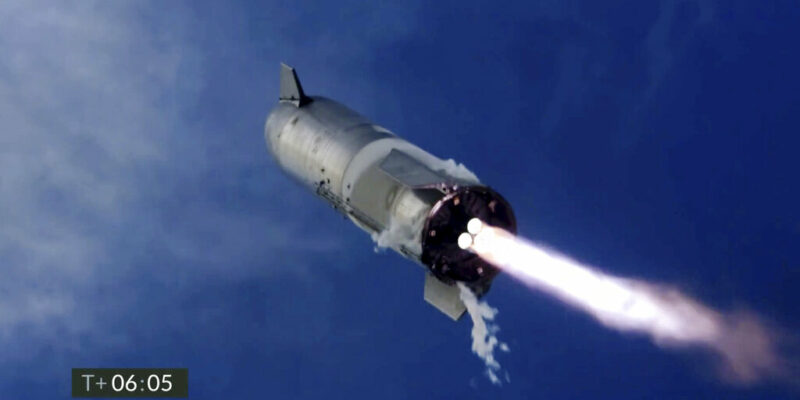 In this image from video made available by SpaceX, one of the company's Starship prototypes fires its thrusters as it lands during a test in Boca Chica, Texas, on Wednesday, March 3, 2021. SpaceX’s futuristic Starship looked like it aced a touchdown Wednesday, but then exploded on the landing pad with so much force that it was hurled into the air. The failure occurred just minutes after SpaceX declared success. (SpaceX via AP)

(AP) — SpaceX’s futuristic Starship has exploded after what looked to be a successful touchdown. The full-scale prototype soared more than 6 miles Wednesday after lifting off from the southern tip of Texas. It descended horizontally and then flipped upright just in time to land. The shiny bullet-shaped rocketship remained intact, prompting a SpaceX commentator to declare, “third time’s a charm.” But soon afterward, the Starship exploded and was hurled into the air by the force. Two previous test flights crash-landed in fireballs. SpaceX founder Elon Musk plans to use Starships to send people to the moon and Mars.

US Jobless Claims Tick Up To 745,000 As Layoffs Remain High