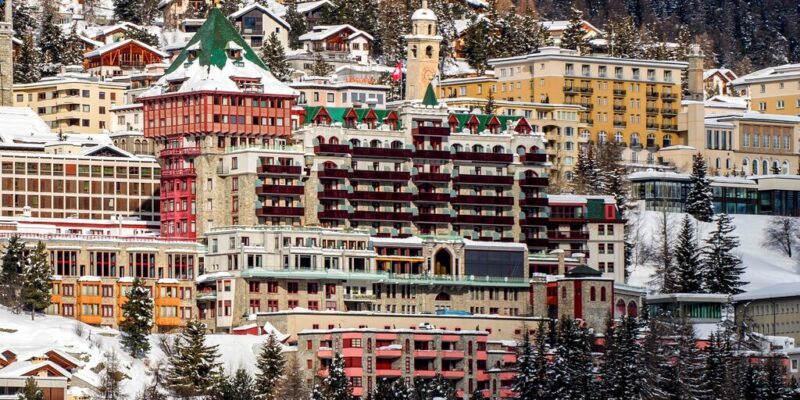 Exterior view of the hotel Badrutt's Palace, center, in St. Moritz, Switzerland, Monday, Jan. 18, 2021. Swiss authorities say they have placed two hotels under quarantine and ordered all guests and employees be tested after a new variant of the coronavirus was detected among them in the upscale skiing resort of St. Moritz. (Giancarlo Cattaneo/Keystone via AP)

BERLIN — Swiss authorities have started mass testing residents and visitors in St. Moritz after a new variant of the coronavirus was detected in the upscale skiing resort.

People were asked to register online and come in for free tests to a local gym and a beverage store on Tuesday, after two luxury hotels were put under quarantine Monday. All schools, kindergartens and skiing schools were closed.

Officials said at least two dozen cases were detected in the two hotels, which local media identified as the Palace and the Kempinski hotel.

The Kempinski said late Monday that health authorities had confirmed cases of the mutated coronavirus among the hotel’s employees.

“Local health officials have ordered that all guests and staff at the hotel should be quarantined to minimize exposure to the public,” a spokeswoman for Kempinski told The Associated Press. “The hotel is strictly following the advice of the local health authorities and World Health Organization guidelines.”

All people in St. Moritz who were 5 and older were asked to participate in the test, which was voluntary. Swiss media reported that the variant detected in St. Moritz was first found in South Africa.