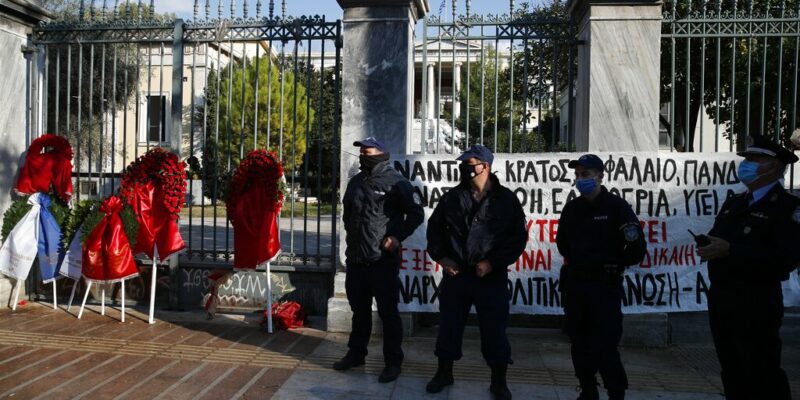 Police stand guard outside the Athens Polytechnic in the Greek capital on Monday, Nov. 16, 2020. The government has banned an annual rally to mark the anniversary of Nov. 17, 1973 uprising by Polytechnic students against the military dictatorship that then ruled the country and collapsed the following year. Left-wing opposition parties have criticized the decision taken due to the pandemic and vowed to defy the ban. (AP Photo/Thanassis Stavrakis)

(AP) — Thousands of police officers have been deployed in Athens and the northern Greek city of Thessaloniki to prevent gatherings to mark the anniversary of the 1973 crushing of a student uprising against Greece’s military junta. Nov. 17, the day the uprising was quashed, is marked each year with wreath-laying ceremonies at the Athens Polytechnic commemorating those who died there, followed by marches to the U.S. Embassy. The United States had backed the dictatorship that ruled Greece for seven years from 1967. But the Greek government has banned the marches this year, citing public health concerns as the country struggles to contain a resurgence of the coronavirus. A Communist Party-backed union defied the ban, gathering briefly near the U.S. Embassy.