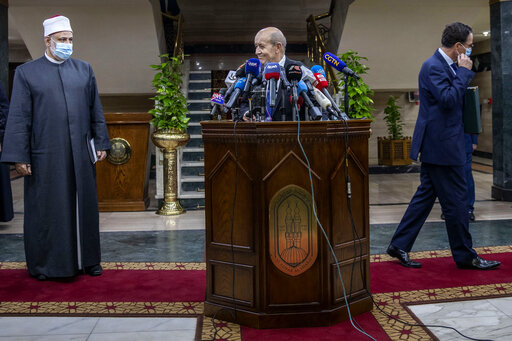 French Foreign Minister Jean-Yves Le Drian, center, smiles at Deputy Head of Al-Azhar Mohammed el-Doweiny before speaking at a press conference at the headquarters of Al Azhar, in Cairo, Egypt, Sunday, Nov. 8, 2020. Le Drian visited Cairo on Sunday to meet with political and religious leaders in an effort to calm tensions and misunderstandings with the Arab and Muslim world following anti-French protests and three Islamic extremist attacks on France. (AP Photo/Nariman El-Mofty)

(AP) – France’s top diplomat is visiting Egypt in an effort to calm tensions with the Muslim world. Sunday’s visit followed anti-French protests over caricatures of the Prophet Muhammad and three Islamic extremist attacks on France.

At a press conference in Cairo, Foreign Minister Jean-Yves Le Drian emphasized that France is fighting against terror and extremism, not Islam. He said: “As we always defend the freedom to practice Islam in France … we are also determined to fight against extremism and terrorism.” He met with the Egyptian president, a key French ally, as well as the leader of the Sunni Muslim world’s foremost religious institution, which is based in Cairo.

Eta Expected To Be Hurricane And Strike Florida Keys