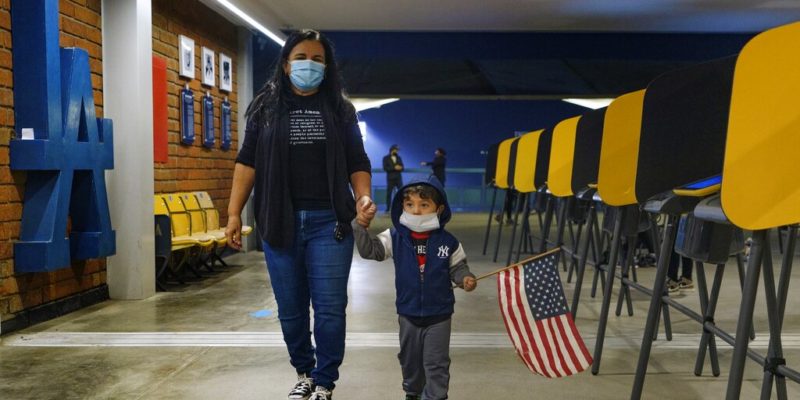 Lisa Carrera, a former Los Angeles Unified School history teacher from La Puente, Calif., holds the hand of her grandson Maverick, 2, after casting her ballot in-person at the Top of the Park at Dodger Stadium in Los Angeles, Monday, Nov. 2, 2020. Turnout has been massive during the early voting period as Californians cast ballots for president, the state Legislature, local offices and on a dozen statewide propositions. By Monday more than 11 million people had already returned their ballots. (AP Photo/Damian Dovarganes)

(AP) — Americans are making their choice between President Donald Trump and Democrat Joe Biden, selecting a leader to steer a nation battered by a surging pandemic that has killed more than 231,000 people and cost millions their jobs. Nearly 100 million Americans voted early, and now it falls to Election Day voters to finish the job, ending a campaign that was reshaped by the coronavirus and marked by tensions over who could best address it. Biden entered Election Day with multiple paths to victory. Trump has a narrower but still feasible road to clinch 270 Electoral College votes. Control of the Senate is at stake, too.