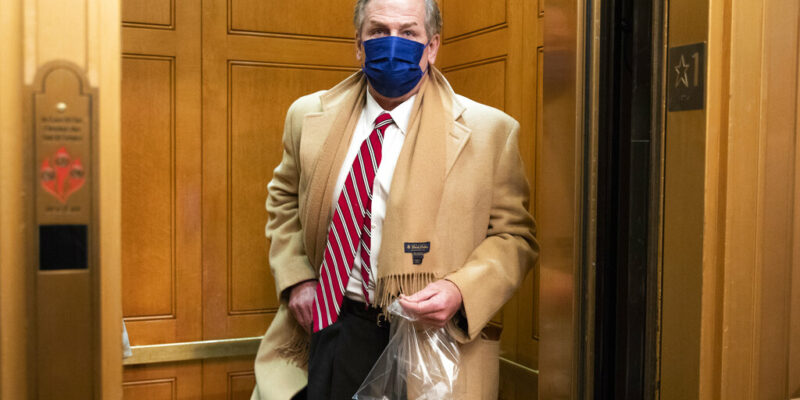 Michael van der Veen, lawyer for former President Donald Trump, arrives on the third day of the second impeachment trial of Trump in the Senate, at the Capitol, Thursday, Feb. 11, 2021, in Washington. (Michael Reynolds/Pool via AP)

Lawyers for former President Trump are laying out their defense in his Senate impeachment trial. Attorney Michael van der Veen called the trial an act of partisan political vengeance and a “witch hunt.”

Van der Veen argued there was nothing in the former President’s speech to supporters on January 6th that later incited violence at the Capitol. He argued that because House managers claim the riot was premeditated, “You can’t incite what was already going to happen.” Trump headlined a huge rally near the White House and repeated allegations that the 2020 election was rigged and stolen from him.

Van der Veen noted many Democrats have challenged presidential election results in years past. He said the Trump rally was peaceful and played video clips of Democrats advocating violent behavior.

Meantime, Van der Veen suggested Antifa was involved in the attack on the Capitol. He also cited violent leftist protests around the U.S. Van der Veen said Trump has consistently opposed mob violence. He argued this is a time for unity and healing, not retribution. Van der Veen also insisted the trial is unconstitutional as Trump is no longer President.

Biden Admin To Allow About 25K Asylum Seekers Into U.S.