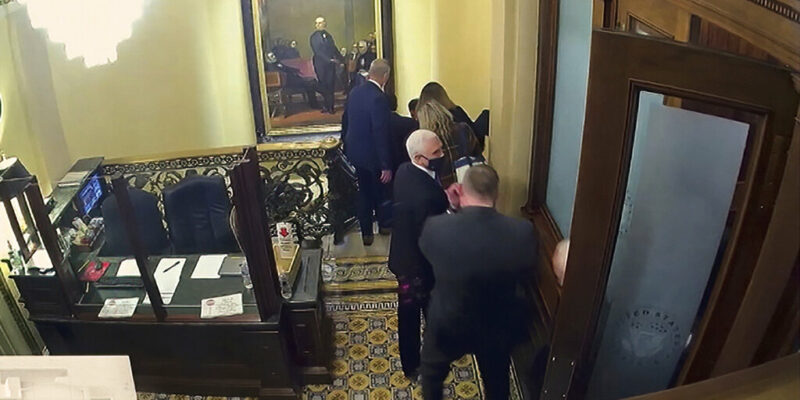 In this image from video, a security video shows Vice President Mike Pence being evacuated as rioters breach the Capitol, as House impeachment manager Del. Stacey Plaskett, D-Virgin Islands, speaks during the second impeachment trial of former President Donald Trump in the Senate at the U.S. Capitol in Washington, Wednesday, Feb. 10, 2021. (Senate Television via AP)

(AP) — Prosecutors in Donald Trump’s impeachment trial have unveiled chilling new security video for Senate jurors and the nation. The video and police audio show the mob of rioters breaking into the Capitol, smashing windows and doors and searching menacingly for Vice President Mike Pence and House Speaker Nancy Pelosi.

Overwhelmed police beg on their radios for help. The House prosecutors argued that Trump was no “innocent bystander” but the “inciter in chief” of the deadly attack.

Wednesday was the first full day of trial arguments, with House prosecutors focusing on what happened after Trump urged his supporters to “fight like hell” over his election loss to Democrat Joe Biden.