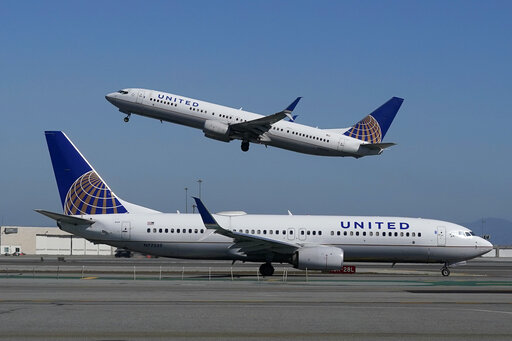 FILE - In this Oct. 15, 2020, file photo, a United Airlines airplane takes off over a plane on the runway at San Francisco International Airport in San Francisco. United Airlines says it will train 5,000 pilots at its own academy in this decade, and it hopes that half of them will be women or people of color. United said Tuesday, April 6, 2021, it is now taking applications for the academy in Arizona, including from people who have no flying experience. (AP Photo/Jeff Chiu, File)

(AP) — United Airlines says it’s investing in a startup that hopes to build small electric-powered planes that might be flying in a few years. United made the announcement Tuesday, but didn’t say how much it’s investing in Sweden-based Heart Aerospace. United says the startup’s ES-19 “has the potential” to carry passengers short distances by the end of the decade. United says it has conditionally agreed to buy 100 of the 19-seat planes if they meet certain standards, which United isn’t spelling out. It says that Mesa Airlines, which operates many United Express flights, is making a similar pledge for 100 planes.