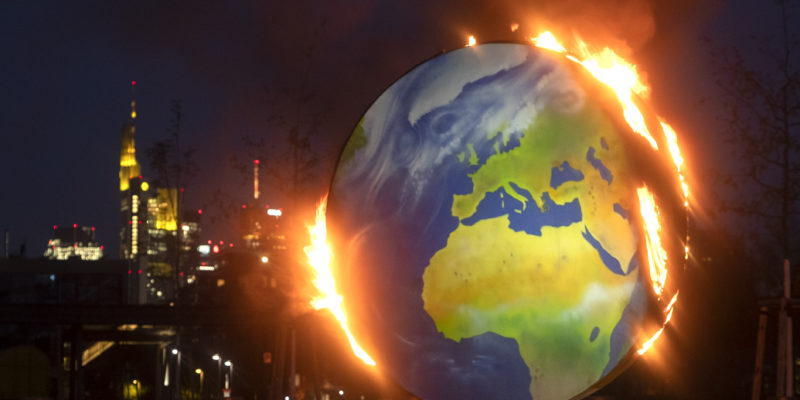 A makeshift globe burns in front of the European Central Bank in Frankfurt, Germany, Wednesday, Oct. 21, 2020. Activists of the so-called "KoalaKollektiv", an organization asking for climate justice, protested with the burning of the globe against the ECB's climate policy. (AP Photo/Michael Probst)

(AP) — The United States formally left the Paris Agreement, a global pact forged five years ago to avert the threat of catastrophic climate change. The move was long threatened by U.S. President Donald Trump and triggered by his administration a year ago. It further isolates the United States in the world but has no immediate impact on international efforts to curb global warming. Some 189 countries remain committed to the 2015 accord, which aims to keep the increase in average temperatures worldwide “well below” 2 degrees Celsius compared to pre-industrial levels. Scientists say that any rise beyond 2 degrees Celsius could have a devastating impact on large parts of the world, raising sea levels, stoking tropical storms and worsening droughts and floods.

Pope Returns To Private Library For Audience As Virus Surges

Democrats Losing Paths To Senate Control As GOP Hangs On