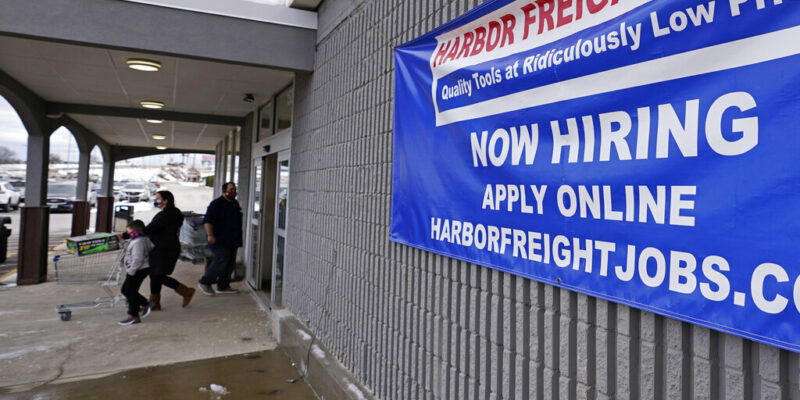 FILE - In this Dec. 10, 2020 file photo, a "Now Hiring" sign hangs on the front wall of a Harbor Freight Tools store in Manchester, N.H. U.S. employers cut back sharply on hiring in December, particularly in pandemic-hit industries such as restaurants and hotels, as soaring virus infections and government restrictions weakened the economy that month. The number of available jobs rose slightly and layoffs fell, according to the Labor Department’s Tuesday report, known as the Job Openings and Labor Turnover Survey, or JOLTS. (AP Photo/Charles Krupa, File)

(AP) — The number of Americans applying for unemployment aid rose last week to 861,000, evidence that layoffs remain painfully high despite a steady drop in the number of confirmed viral infections.

Applications from laid-off workers rose 13,000 from the previous week, which was revised sharply higher, the Labor Department said Thursday. Before the virus erupted in the United States last March, weekly applications for unemployment benefits had never topped 700,000, even during the Great Recession of 2008-2009.