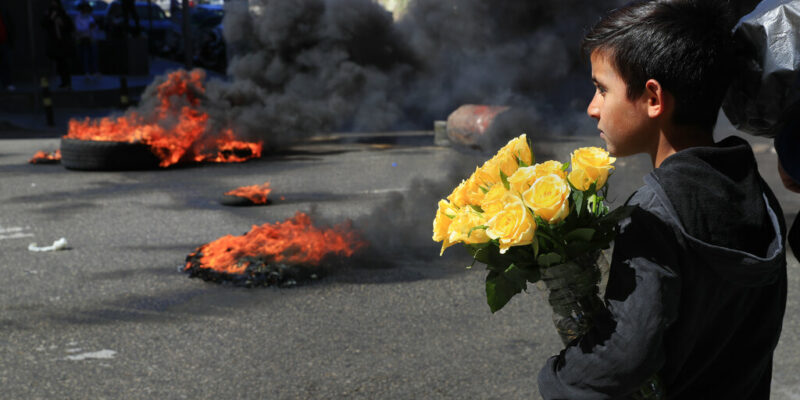 A Syrian boy who sells flowers on the street watches protesters burn tires to block a main road during a protest against the increase in prices of consumer goods and the crash of the local currency, in Beirut, Lebanon, Tuesday, March 16, 2021. Scattered protests broke out on Tuesday in different parts of the country after the Lebanese pound hit a new record low against the dollar on the black market. (AP Photo/Hussein Malla)

(AP) — Protesters have taken to the streets in the Lebanese capital, blocking roads with burning tires and garbage containers as the Lebanese pound continued to plummet to all-time lows against the dollar.

Small groups of young men, some driving scooters, have pelted shop windows with stones in an attempt to force them to close. The protests resumed Tuesday as the Lebanese pound continued its crash, plunging to a new low of 15,000 to the U.S. dollar on the black market.

The currency has lost 90 percent of its value since October 2019, when anti-government protests erupted. The crash has pushed more than half the population into poverty as prices soared

Hospitalizations In Texas From COVID-19 Continue To Drop