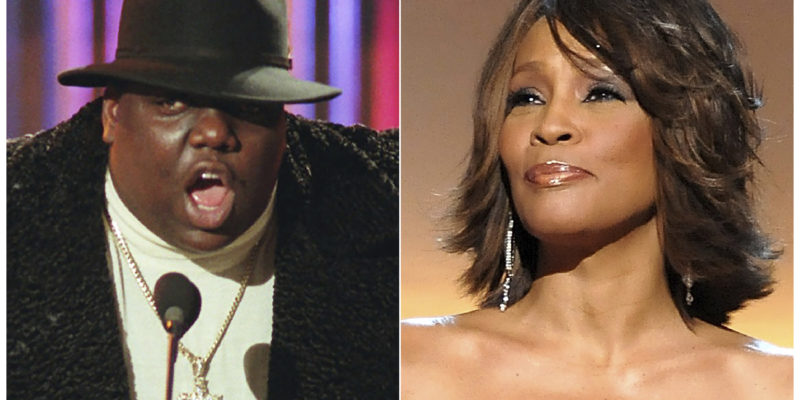 This combination photo shows Notorious B.I.G., who won rap artist and rap single of the year, during the annual Billboard Music Awards in New York on Dec. 6, 1995, left, and singer Whitney Houston at the BET Honors in Washington on Jan. 17, 2009. Houston and the Notorious B.I.G. are among the inductees to the Rock and Roll Hall of Fame's 2020 class. (AP Photo)

(AP) — Years after their deaths, Whitney Houston, the Notorious B.I.G. and T. Rex’s Marc Bolan will be inducted into the Rock and Roll Hall of Fame. Joining them as part of the hall’s 2020 class are Nine Inch Nails, Depeche Mode and the Doobie Brothers. The Rock Hall’s annual induction ceremony was supposed to take place in May but things changed because of the coronavirus pandemic. Instead, a taped TV special airing Saturday on HBO at 8 p.m. EST will serve as the induction event, with big names like Bruce Springsteen, Sean “Diddy” Combs and Alicia Keys making appearances alongside some of the inductees.