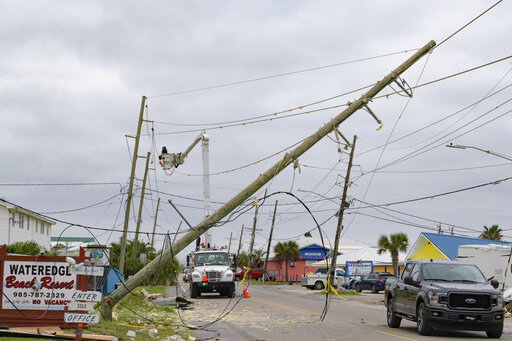 Crews from Entergy work on power lines as one overhangs La. Hwy 1after it was damaged by Hurricane Zeta at the Wateredge Beach Resort in Grand Isle, La., Friday, Oct. 30, 2020. Gov. John Bel Edwards says the damage was “catastrophic” in Grand Isle, a barrier island community south of New Orleans that was one of the hardest-hit areas. (AP Photo/Matthew Hinton)

(AP) – Toppled utility poles and debris from damaged buildings litter much of Grand Isle, Louisiana, a vulnerable barrier island community where residents were among the first to witness the ferocity of Hurricane Zeta.

One resident says the middle of the narrow island looks like a bomb was dropped. But the storm’s damage wasn’t limited to the Gulf coast. From south Louisiana to Virginia an estimated 1.3 million homes and businesses remained without power Friday afternoon.

Zeta hit Louisiana as a Category 2 hurricane Wednesday. It’s remnants moved off the northeast coast into the Atlantic on Thursday night. Six deaths have been blamed on the storm.